What is the flop effect in paint and how to minimise it? 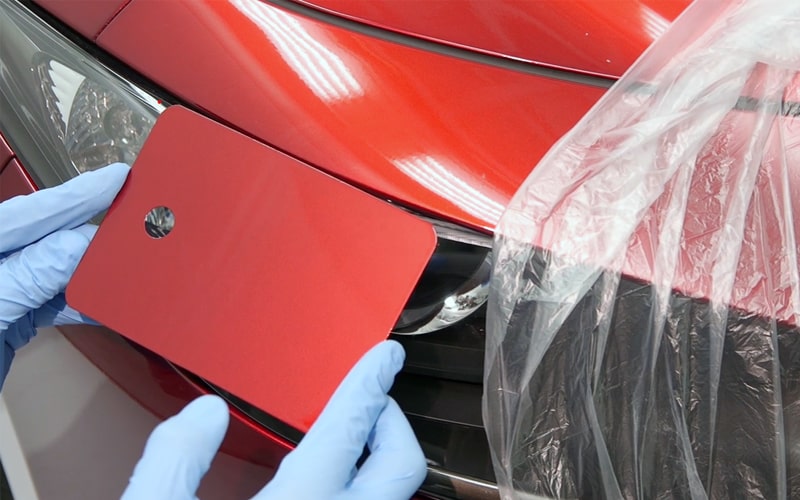 It is likely that on some occasion after having repainted one or more parts in a bodyshop you detect how the colour and the gloss applied on the surface varies depending on the angle of vision from which you observe the part. This phenomenon is known as the flip flop effect, or flop effect in paint, and it is related above all with the application of metallic or pearlescent colours.

Let us now look at the factors that cause the flop effect and some tips on how to minimise it.

Summary hide
What is the flip flop effect in car paint?
How to minimise the flop effect during repainting

What is the flip flop effect in car paint?

These colours are composed of small metallic particles of different shapes (irregular, lenticular) or sizes (coarse, medium or fine aluminium). The most complex colours have up to 70-80% of aluminium particles in their formulation. The difficulty of colour reproduction depends on the finish and shade.

The deposition, orientation and size of these particles included in the colour formula will determine the effect obtained, it being possible to find differences in the perception of brightness (light-dark variation) and/or colour of the repaired part.

How to minimise the flop effect during repainting

A good practice to reduce the flip flop effect during repainting work in the bodyshop is to use an additive specially designed for this purpose.

A good example of this type of product is SINNEK’s WA/6070 – ADDITIVE FLOP WBC 70. Using this additive provides professionals with a tool that will make it easier to obtain a correct colorimetry in the bodyshop and an increase in the profitability of the repair, by reducing the chances of having to repeat the work done.

On the other hand, a good complementary practice, besides the use of additives, will consist in the correct technique and application of special colours and their metallic particles, such as, for example, the complex three-layer colours.

For this, you will need to orient and deposit the aluminium particles steadily and evenly over the entire surface, with a uniform application plane with respect to the part, trying to avoid changes of direction during application.

Incorrect orientation of the metallic pigments can also lead to various painting defects such as cloudiness or clouding in the paint.

Likewise, an excessively wet or excessively dry application may cause a greater variation in colour and gloss by making it difficult for the particles to deposit uniformly on the surface.